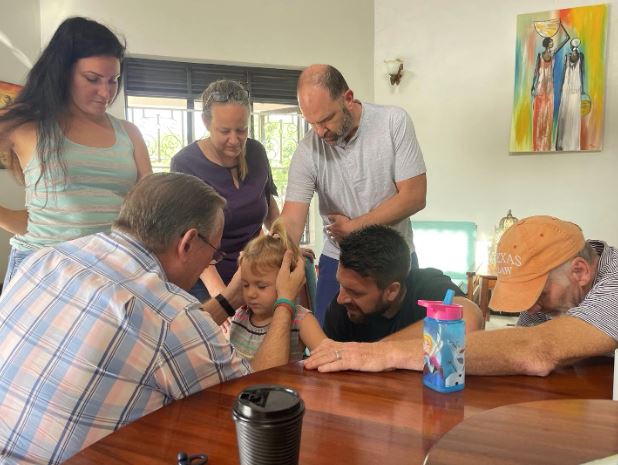 Near the end of our recent Uganda Leadership Tour, we had a few moments to minister healing to Vienna, the 3-year-old daughter of David and Elizabeth who oversee the Guest House where we stayed in the northern city of Gulu.

Vienna’s ears were severely impacted by a bout with COVID-19 and her eardrums had difficulty moving because of blockages.  On the Thursday morning of our departure from Gulu to return to Entebbe in the south, we made sure we had time to take authority over the hearing loss to get this precious girl healed, and her hearing was dramatically improved!

Her family (dad David just behind Vienna in the photo, mom Elizabeth standing to my left, and older sister [not in photo but in school that morning]) had planned a visit to a doctor in Johannesburg, South Africa, early the next week to have surgery done on Vienna’s ears.

I received a report from David while I was on my way home to California the next week: the Johannesburg doctor examined Vienna’s ears and they were totally normal, avoiding the need for surgery! Praise the Lord!

So the family shifted the trip from surgery focus to “vacation” status!

Added note: Tamara (the woman standing in the middle of the picture) was so moved by Vienna’s healing that she asked us to minister healing to her back which had been in pain for 15 years! So, Steven (wearing the orange cap) commanded healing and all Tamara’s pain left her back!