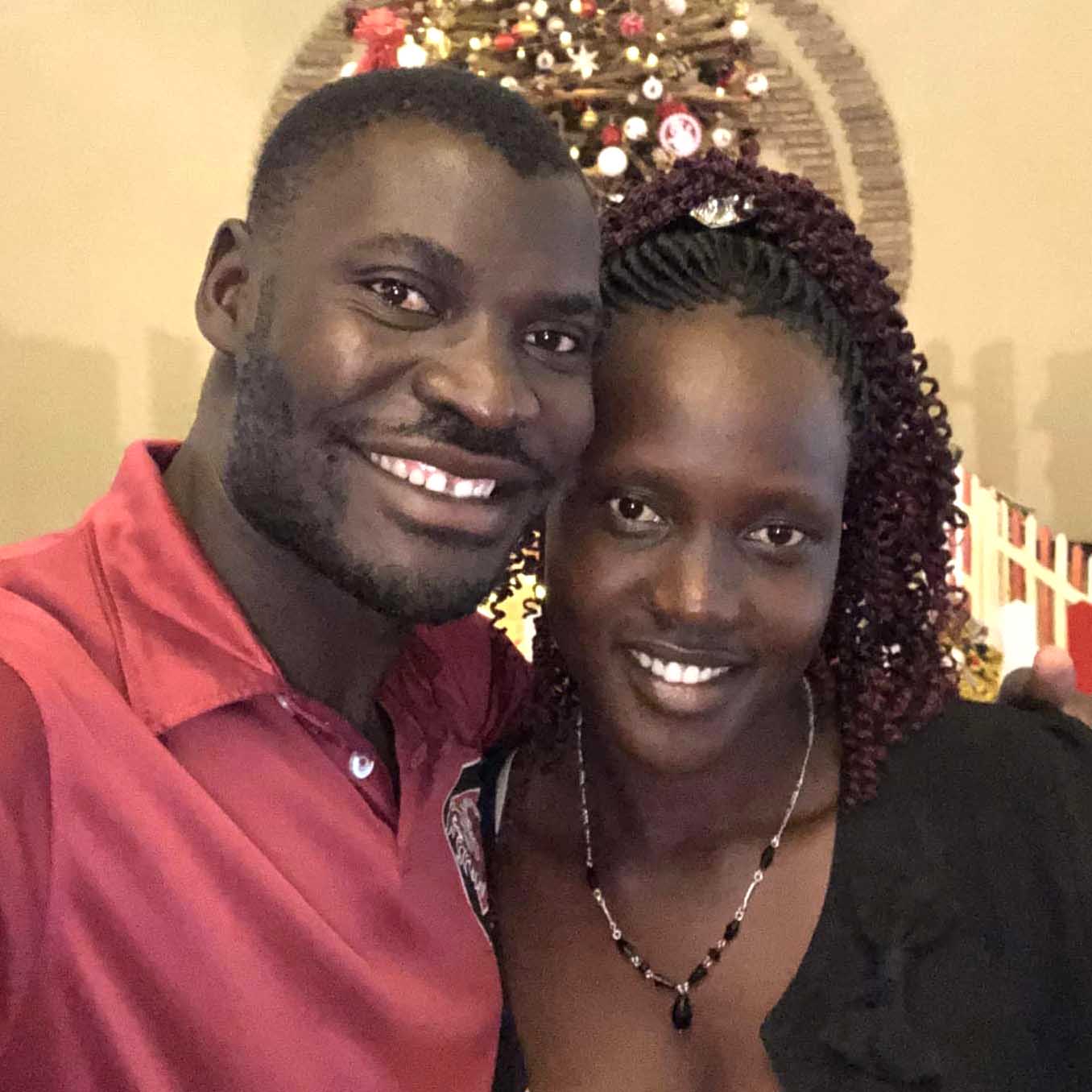 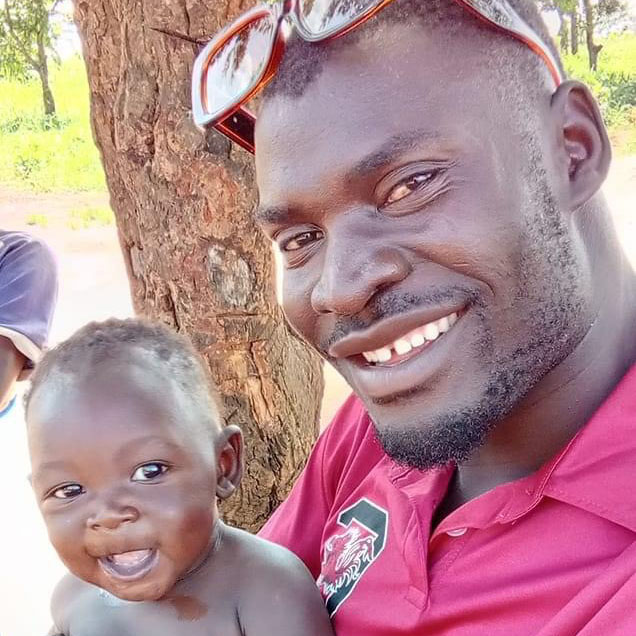 BACK TO FATHER'S FRIENDS PAGE

Simon Okema will turn 27 this September. While some lament turning another year older, especially as one begins to approach those bigger, rounder numbers, Simon is grateful. For him, each birthday is a poignant reminder of what a blessed life he lives. You see, Simon’s life is a miracle. His story is one that only Abba could pen—moving from tragedy to triumph.

As a child, Simon grew up in Gulu, a poor community in Uganda. This was a painful time in Uganda’s history, marked by the extreme violence of a rebel army who abducted young children, violently killing many of them and their families. Simon was witness to numerous atrocities toward his family, losing many close to him in the process. Often, family members were killed in front of children with no regard. Simon was exposed to things no heart should ever experience.

Because of this, Simon lived in fear for his life. He often hid in the bushes at night trying to escape the rebels. He did not sleep at home since he knew that’s when homes were most likely to be raided and children brutally murdered. Simon was once captured by the insurgents, but by the grace of God, escaped. Simon says that in those fearful times, he knew that God had not forgotten Him. That he had escaped because of His goodness.

Displaced But Not Forgotten

In 2001, Simon was taken to a displacement camp. He initially felt safer there because the government provided security. However, in time, the rebels began to infiltrate the camps, stealing their food and worse—their young men and women.

In 2006, after five years of living in the camp, a team from Canada came to remove Simon and some of the children. A true miracle! Again, Simon knew he was not forgotten. God had handpicked him to go, and it was by His grace that he was rescued. Simon and the others were moved to an orphanage in the city of Kampala where life began to improve. For the first time, Simon and many of the others had clothes and shoes to wear. They were well fed and given access to education and health care. The hope that he had lost in Gulu was finally replaced by the love shown to him.

In time, however, the orphanage ran out of money. Simon and the others were returned to the displacement camp. This was a hard blow for Simon after tasting what freedom felt like. But Simon’s faith persisted. Even during the most challenging times, he knew God was good and he continued to trust Him.

After bouncing back and forth between the displacement camp and the orphanage (always because of financial reasons), Simon met Steve Trullinger of The Father’s Touch Ministries while staying at the orphanage. Often referred to by Simon as “Papa Steve,” Steve began to pray for Simon, sharing Jesus with him and the others. The Father’s Touch Ministries began to fund the orphanage and once again, Simon had access to food and education. This time, the money didn’t run out.

Simon grew spiritually in his walk with Jesus and began preaching to others at school about God’s love for them. Other students started accepting Jesus into their lives because of Simon, who was eventually elected as the student president of the school. He was determined to serve the students well, showing love toward them and praying with them.

He raises the poor from the dust and lifts the needy from the ash heap; he seats them with princes and has them inherit a throne of honor. “For the foundations of the earth are the LORD’s; on them he has set the world. 1 Samuel 2:8

Now that he had returned to school and was flourishing, Simon began taking exams. He worked hard and in time, graduated from high school. Simon served the Lord with all his heart and God blessed him incredibly. He started praying for healing and deliverance in others and saw God’s miraculous powers flow out of him. People were being healed and delivered of demons in the mighty name of Jesus.

After graduating from high school, Simon returned to the village in Gulu where he had grown up hiding from the rebels. He was the first person in his entire village to give his life to Jesus so when he returned, he began preaching about Jesus and sharing the gospel. Today, a staggering 98% of people in the village know the Lord! Simon is a pastor and leads a church of about 100 people. He sees God working miracles in their midst every single day.

In 2018, Simon met his beautiful wife, Aero Sarah, and they began to serve and worship the Lord together. When they got married in March of 2019, thousands of people came out in droves to witness their wedding. It was powerful, Simon says, because so many people saw the hand of the Lord and rejoiced with him that God had blessed him with such a wonderful wife. They became pregnant soon afterward.

Tragedy struck when the couple miscarried and lost their first child. They would become pregnant again and sadly, miscarry a total of three times. It was an incredibly painful time for this newlywed couple to lose their children. Simon had already experienced such loss in his life. Yet, even in their grief, they persisted in prayer, leaving everything to God and believing He would bless them with a child.

After visiting a local hospital, the couple learned that Simon’s wife would need surgery for her body to be able to carry a baby to term. The doctor told them that only surgery could restore her. God had different plans.

Simon began to pray for his wife. Soon she became pregnant, and the doctors prepared her for surgery. Simon prayed for God’s will to be done and a miracle happened before surgery could ever take place.

Even though the medication for surgery had already been administered to his wife, the doctor stopped to check and said the problem was gone. She no longer needed surgery! Simon’s wife was healed in Jesus’ name. The doctor sent her home with instruction to rest and before long, their beautiful son, Kimar Jonathan Okema, was born on March 8, 2021, just a few days before their third wedding anniversary.

Simon and his wife chose the name Kimar because it means “with love” and Jonathan because it means “it’s God who lives.” Okema means “come to me.” They are so blessed to see the hand of God with them after so many pain-filled years. God has been faithful and good, despite trials and suffering. He has (and still is) working out all things for good.

You intended to harm me, but God intended it for good to accomplish what is now being done, the saving of many lives. Genesis 50:20

God’s blessing didn’t stop there. Shortly before Kimar’s birth, Simon became a counselor in his area during an election year. The people in his village who had nominated him cheered on all that God was doing in his life. Simon began running a school in the town, providing free education to children. He is passionate about giving children the life he didn’t have growing up.

Simon’s life has been long and painful with many twists and turns. Even still, he says that the Lord has been good to him after such a difficult season. God has restored hope in Simon through all that He has done for him. He is grateful for the ways God has use The Father’s Touch Ministries. It set his life in the right direction when he needed it the most.

After all the years of pain, God redeemed the broken areas of Simon’s life. The first from his town to graduate from high school and get married in a church, Simon says that God is, “wiping away the tears from his eyes.” God is replacing those tears of hurt and pain for ones of joy and utter delight. This is Abba’s heart.

BACK TO FATHER'S FRIENDS PAGE