Skip to main content
Close Search
All Posts By

Admin In Adventures in Africa

The second night of our Freedom Festival in Gulu (Northern Uganda) was off the charts!

The second night of our Freedom Festival in Gulu (Northern Uganda) was off the charts!

I started by asking ten people with pain in their bodies to come up to the platform and line up facing the crowd. Ten-year old, Angel Gift (her real name!), responded to my call to the crowd of over 5,000 for a child volunteer who was saved, filled with the Holy Spirit, and believed that God could do anything!

I coached little Angel Gift to then simply walk by the line of people, without praying for them or even looking at them, and believe that they would be healed by the power of the Holy Spirit flowing from within her (John 7:38-39), a la Peter in Acts, Chapter 5.

By the time Angel Gift had walked past the line of people three times, all but one had been healed! The last one, (a man with severe kidney pain), was finally healed also as many in the crowd joined in believing that “rivers of living water” were “flowing from their innermost being” to heal the man’s kidney!

Next, I sent our Father’s Touch mission team down on the field to simply walk past people as they made their way through the crowd, and believe that many would be healed, a la Peter.

Over 200 people were healed this way, with no one praying for them!

Of particular note was a young, approximately 2-year old paralyzed girl, who was being held in her mother’s arms down on the field. As one of our team members walked by, the mother believed her daughter was healed by the power of the Holy Spirit being released in this way and tested her daughter’s legs by setting her down on the ground. The girl immediately began walking on her own! 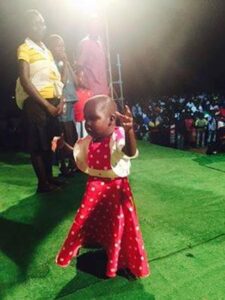 Praise God for his compassionate healing as in the days of the Apostle Peter!

Mama and daughter came up on the platform to testify, and the crowd screamed in delight as the young girl walked perfectly several times in full view of the many people who knew about her former paralysis!

The Lord did many other amazing miracles tonight and many believers in the crowd committed to healing their sick neighbors tomorrow, simply by walking past them! Testimonies will be coming!

Many dozens of people in the crowd of over 1,000 were saved

Our first night (Wednesday) at the Freedom Festival in Gulu (Northern Uganda) was powerful! As I preached a very simple message on the power in calling on the name of Jesus, many dozens of people in the crowd of over 1,000 were saved (Joel 2:32), healed, and delivered of addictions, demonic oppression, and fears, etc. The crowd swelled further, and (there was) more ministry by the team and the local pastors, resulting in many more salvations! Praise God for the power in calling on the name of His Son, Jesus Christ! (Acts 2:21)
Return to Testimonies
Admin In Adventures in Africa

We prayed for a dead woman and she resurrected today…

While we were seeing many miracles this weekend on the Sunshine Coast of Australia, one of my spiritual grandsons, Dismas Onjula, in Dandora (Nairobi), Kenya, was conducting a 3-day Freedom Festival (crusade). Here is his brief report of many salvations and the raising of a dead woman through prayer:

“It was phenomenal and a real climax indeed today in (the) Dandora Crusade. More than 700 souls were born again within those 3days {Yes It’s Time To Make Hell Empty and Make Heaven Full!} because the Harvest is plenty indeed brethren. Yesterday, we prayed for a dead woman and she resurrected today she gave a testimony and God be the glory for His mighty doings in the land of the living.”

“Papa she’s a woman single mother of 4 children. She was just brought from the crowd bleeding blood through the nose and mouth; then we allowed the ushers and one nurse to (perform) first aid but 5 minutes letter we were told she’s gone. Then they brought the body in front of the pulpit. Then the Holy Spirit said we should close her grave and claim her back to life and she came back to life and God be the glory.”

The realm of miracles

The meetings tonight with Steve Trullinger from Torrance, CA were off the hook!!!! Amazing time breaking free in the worship followed by an amazing time learning about and releasing the Lion Of Judah from within us! Crowds are growing and so is the presence. Finished with laughing at the enemy and seeing demons run. Tomorrow night we are moving in the realm of miracles. So good to honor our first nations brothers and sisters and so good to see so many of them out. WE love you!!!

On the second Revival Encounter Evening at Eagle Mountain Church in Nanaimo, BC, on Saturday night, God dropped a “joy bomb” as volunteers first commanded healing of bodies with the laying of anointed handkerchiefs, a la Paul in Acts, Chapter 19! Then the whole congregation joined in as they waved anointed handkerchiefs, scarves, and even tissues at the sick who were present and many were healed instantly! The party kicked into high gear at the conclusion as everyone danced to lively music and prayed for rivers of living water (the Holy Spirit) to gush from their innermost beings (John 7:38-39) to heal even more of the those in pain nearby! Several more were delivered from pain by this powerful demonstration of God’s eagerness to heal! Please pray that the revival momentum continues to build on Vancouver Island!!

Healed from back and hip pain!

Day #3: At our Sunday night Revival Encounter at Port Hardy Christian Fellowship near the north end of Vancouver Island, we saw several people healed by the power of the Holy Spirit flowing through believers in the congregation. One woman with a high level of pain (9 on a scale of 10) in her back and hips (for four months since she was hit by a truck) was delivered completely and was dancing freely at the end of the service! This first healing of the evening was accomplished in front of the whole congregation through a volunteer who believed that Jesus in the woman would partner in the healing process. The woman in pain felt the power of Jesus’ love within her body and all the pain disappeared in a few seconds, leaving her astonished at the power of compassion! Father, pour out your compassionate love on the whole of Vancouver Island!! ❤️

Deliverance from a lifetime of pain

At our Sunday morning service at Eagle Mountain Church in Nanaimo, BC, a woman testified that at our “Manifesting Miracles” workshop at the nearby Honeymoon Bay Retreat Centre on Thursday she was totally delivered from a lifetime of pain that had been at a “9” level (out of “10”)! Another woman who was sitting in the front row at our Saturday night Revival Encounter service testified that she was totally healed by the “overflow” of healing power that blessed another woman being healed in front of the congregation by a volunteer. She called it “Godmosis” healing! ???? Abba is pouring out his Spirit on Vancouver Island! Hallelujah!

Our series of Revival Encounter Evenings on Vancouver Island, BC, started off on Friday night in Nanaimo with a wonderful display of the healing power of the Holy Spirit! Little 8-year-old Ara simply walked by (a la Peter in Acts, Chapter 5) a line of folks with pain in their bodies and four of them were completely healed, while at least another eight experienced more than 50% reduction in their pain! More people were healed as the congregation jumped in to walk by the sick and many were blessed with significant improvement! What a way to kick off revival on Vancouver Island! Praise the Lord!

Pain from an old injury, gone!

At a recent meeting in Lake Elsinore, CA, I spoke on “The Healing Power of Compassion,” and the saints that were gathered there exercised their faith at the end of the meeting as they commanded the sickness and infirmity among them to be healed.

A man testified afterward that his right foot had been crushed in an accident 42 years ago and he had suffered pain and circulation problems in that foot ever since. After the ministry time, he shared with tears of joy that the pain was now gone completely and he was able to stand and move his foot without any discomfort whatsoever!

God’s compassionate heart birthed that miracle and everyone present was blessed to witness its manifestation. Praise God for his compassion and for his joy in seeing his children believe in its power!

At the Sunday night meeting of The Portal in Vancouver, WA, more than 20 people with pain in their bodies were healed as volunteers simply walked by them, a la Peter in Acts, Chapter 5! The same Spirit that “leaked” out of Peter as he walked the streets of Jerusalem flows out of believers today! [John 7:38-9]