On the fourth night of our Freedom Festival in Gulu… 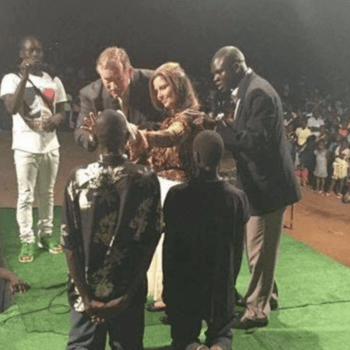 On the fourth night of our Freedom Festival in Gulu (northern Uganda), the authority of the believer was demonstrated with power! (Mt 10:1; Mk 16:17-18; Lk 10:19) After I encouraged the believers in the crowd of over 10,000 in their authority as disciples of Jesus, we jointly commanded every devil to leave the people, the field, and the entire town of Gulu! Roughly half the crowd testified by a show of hands that they themselves had been delivered and felt demons flee away from them! (James 4:7) Bwana asifiwe! (Lord be praised!) Then I called for the blind to come to the platform for healing! Two men, both blind in their left eye, came forward and knelt on the platform in humility before God. Team member Shastine Bredlie and I prayed for God to fill my handkerchief with healing anointing a la Paul in Acts 19:11-12, and then Shastine laid the handkerchief on the blind eyes of the men and commanded healing (see picture). The man with a blind eye for over 20 years received his sight and was able to correctly identify objects with his newly healed eye! The other blind man needed additional ministry by the team on the platform, and he was touched powerfully by the love of God as he began to see some light. He committed to agree with God that his eye would continue to receive sight and to visit us again on the final night of the Festival in order to testify to his miracle. A third person, a young man blind in his left eye since birth, came forward and Shastine ministered to him as well. His eye was completely healed, and he was able to correctly identify the color of a tie worn by a man standing far away on the field! The crowd rejoiced mightily over these miracles, as they demonstrated the authority of the believer over sickness and disease! Finally, I led the crowd in mass healing prayer as they simply waived their handkerchiefs and cloths (anointed by prayer from the platform) at the hundreds of sick people among them. Most were instantly healed because of the commands of the believers who now know their authority! Many people on the field came forward to give their lives to Jesus after these displays of his loving power to heal and deliver! Looking forward, now Gulu has an army of healing ministers who will deliver the city from sickness and disease, and demonic torment! Bwana asifiwe!

Back to Testimonies page