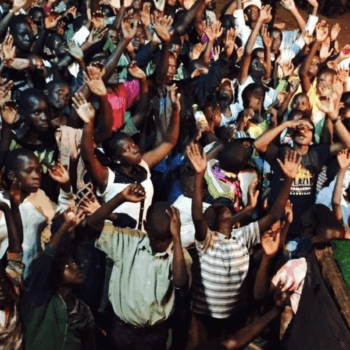 On our fifth and final night of the Gulu Freedom Festival in northern Uganda, we again witnessed the power of calling on the name of Jesus. When a large thunderstorm threatened to wash out the Festival just as we were beginning, I reminded the believers in the crowd that we have authority as sons of God to shift the behavior of the elements, in like manner to Jesus calming the storm [Mk 4:39]. So we united in commanding the rain to avoid our field until we had finished! Even though lightning flashes punctuated my message, and rain fell all around us, not one drop fell anywhere on the Festival field the entire time of our gathering! The believers in the crowd responded en masse to my exhortation to forgive all those who had sinned against them, especially those in years past who had committed horrible atrocities against their families in northern Uganda during Joseph Kony’s despicable treatment of innocent children. As the believers repented for holding unforgiveness, anger, hatred, etc., and made a choice to forgive completely, a powerful deliverance was accomplished, with most of the crowd feeling free now in their hearts. Healing and blessing of the land and the peoples will now accelerate in Gulu and the surrounding region! [2 Chron 7:14]. Hundreds then responded (see picture) to the salvation invitation and the party began! With song and much dancing, many more people were healed tonight by the loving compassion of Jesus as our team reluctantly had to bid adieu to many precious new friends. Praise the Lord for the transformation of this amazing community in northern Uganda! Gulu will now “rise from the ashes” as the empowered army of God here forcefully advances the kingdom of God!

Back to Testimonies page